Here’s a really short guide with a certain quest objective in Monster Hunter World – ‘Search the Ancient Forest for First Wyverian Clues’. If it annoyed me a little there’s quite a likelihood that others felt my pain here too. Here goes.

If you don’t have Ancient Forest Camp (17), unlock it. If you do have it, start from there. (See: Unlocking all MHW Camps)

Head towards the dragon roost (the usual nesting ground of Rathalos, Rathian, and Kushala). You’ll find your handler here. It’s south / southwest really nearby from the Ancient Forest Camp (17). I have a picture below.

You’ll get a cutscene with Rathalos – which has a set spawnpoint at the dragon’s nest.

Tada! You’ll find the First Wyverian after the cutscene! 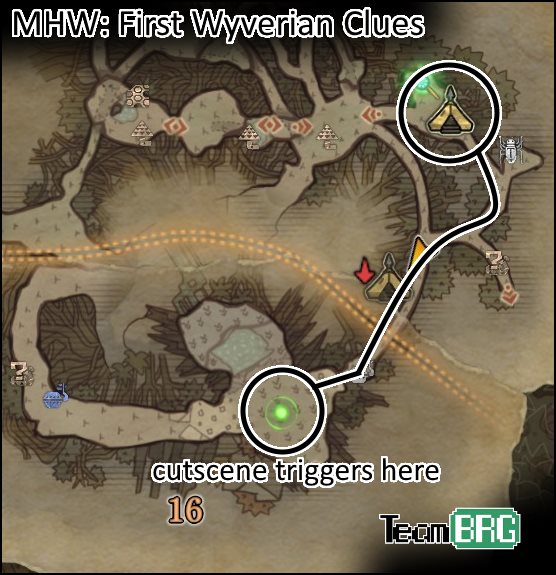 The quest objective transforms into “Hunt a Rathalos“, feel free to return to base first.

While you’re here, I may as well give you a few tips on Rathalos.

YOU DO NOT Have to beat up Rathalos right now! You can go back to base.

The main quest advances, requiring you to complete two different assigned quests, “A Fiery Throne Atop the Forest” and “Horned Tyrant Below the Sands” – to defeat Rathalos and Diablos, respectively.

When I first tried to find the first wyverian on the PS4, I started from the lower left most camp! Imagine the frustration. Thankfully, in my second time around the rodeo on Steam, I knew better…

Well, hopefully that helped you out! See our other MHW Guides!