Ei there, hunters! This guide is all about the hunts in FFXV. Here are the main points: (Work in progress – I’ll update as I go!)

Some marks won’t show up until you’re a certain rank. Rarely, they require completion of other hunts before appearing. Use the search & filter box!

YOU CAN TURN IN HUNTS AT ANY TIPSTER! You can REPEAT hunts for gil/exp.
*It’s very hard to determine “Rank needed” – since I’m backtracking*
I get a lot of questions for: Hunters of Secullam Pass (Coeurls)

Use the search & filter box!

Entries with 2 enemies needed only show the “primary” marks… It doesn’t fit well.
I’ll find the best compromise to have the most info. Screenshots of hunt location
and a map is something I’d like to do in the near future.

Head on to Patreon and see how you can help the site out!

Some hunts don’t show up right off the bat. I’ll discuss all the ways to unlock them.

Ranking up is the most basic one. The more you rank up, the more you’ll see.

Missing 3 stars for rank 10! Aye, so was I. There’s one stupid hunt that’s unlocked after a lengthy quest chain from Vyv (the fat photographer in Lestallum). Get ready for a lot of travel and load screens.

Adamantoise hunt only unlocks after you’ve done the sidequest to face him.

Dungeon Bosses I’m pretty damn sure the recycled dungeon bosses require you to complete the dungeon before the hunts become available.

Hunt Pre-requisite: Finishing a hunt unlocks further ones. While this seems weird I’m nearly 100% sure this happened in Maagho. I could be wrong was just in a daze…

Hunts are unlocked very early in the game – you literally can’t miss it.

All hunt bills are obtained from tipsters (restaurants). Each hunt gives you rewards – usually Gil and Items. EXP is pretty great too, which is obtained when beating marks.

Completing hunts and killing bounties give Stars, which increase your hunters rank. The primary benefit of increasing your rank is being able to undertake more difficult marks.

The hunt system is pretty basic, and there isn’t much to wonder about. The only sad part is you can only take on one hunt at a time!

YOU CAN TURN IN HUNTS AT ANY TIPSTER!!!!
You can repeat hunts for gil / exp!

The rewards for actually ranking up are secondary, as they aren’t THAT good to be a motivator to get your hunter rank up. Again the main benefit of ranking up is purely to undertake better bounties.

Well, happy hunting! FFXV Hunts kind remind you of FFXII, ey? But the latter pulled it off better…

FFXV Guides – if you need more info about this game.

This guide helped you in your hunts? Consider supporting TeamBRG at Patreon!

Wolcen Stats, Attributes | Where & How to spend stat points?

TeamBRG - February 16, 2020
0
Hello there! Here, we discuss the Passive Skill Tree System in Wolcen. It's definitely a welcome level of depth for customization, but not woo...

TeamBRG - February 16, 2020
0
In this quick guide, we discuss the Active Skill System in Wolcen. It's a little more complex than the average skill system out there... 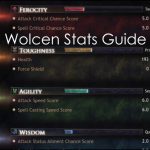 Wolcen Stats, Attributes | Where & How to spend stat points?