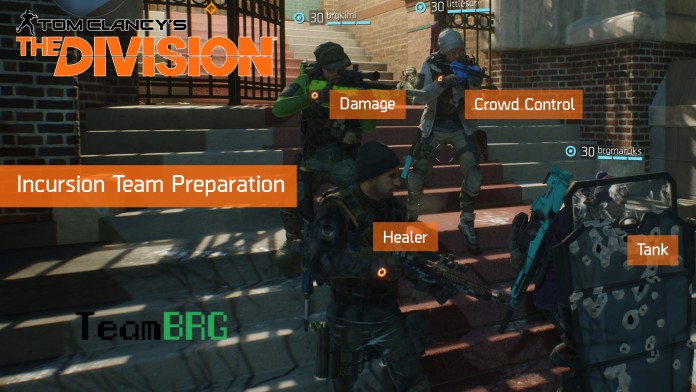 The very first Incursion is just around the corner but is your group ready? With the increased difficulty of the Incursions, TeamBRG has decided to prepare our gear by choosing a specific role. We have determined these roles to be, Tank, Crowd Control, Healer and Damage(DPS). We all started from the same build, which was high firepower, around 70k+ HP and very little skill power. With these builds, we aim to skew ourselves into a more specialized role.

UPDATE: See our video and guide for tips on how to beat Falcon Lost

We are aware that our builds and/or gear may not be exactly optimal or if the roles are even necessary to complete Incursions. Our decision to take on these roles is based on the comments the developers made with the difficulty of Incursions and our experience in MMORPG’s. These are our current builds as it is.

We will not be detailing the build in its entirety, instead we will highlight the ones we think are the most important in relation to the role. The rest you can fill out with personal preference.

These builds are purely for PvE purposes, specifically Incursions. This is not recommended for PvP. (Trust us, we tried)

1. Goal of the build

The tank has two main functions, survivability and threat control. When the tank has the threat of enemy mobs, it means that the party can deal damage without worrying about getting shot at. Because of all the attention the tank will be getting, having high HP and armor is important.

Go for all stamina in your gear rolls and fill out the mod slots with electronics/skill power.

Stamina – for a high HP pool, very important for your suitability. Try to reach around 100k HP

Ballistic Shield (Kinetic Barrier) – Your go-to skill. You will always be whipping this out while you are trying to draw fire from enemies. Skill power increases the HP of your shield, so having high skill power is important.

First Aid (Overdose) – The overheal on first aid is great for your survivability. It gives you an additional 50% HP. Very useful since the tank is always in the front line and may not always be within range of the healer.

Alternative – Sticky Bomb (BFB) – If you are confident in your healer, you can go for a more offensive focused skill. Your high overall skill power makes Sticky Bomb very powerful.

Your main priority should be to find a really good side arm. It can be anything, pistol, magnum or shotgun.

Secondary tank, secondary damage source and prime source of crowd control. Prevents mobs who get past the tank from getting clo se to the back line.

Emergency reviver, for both tank and healer. Since the healer is closer to the back, he may not be able to reach the tank in time. Will also revive the healer if needed.

Craft mostly firearms gear with some stamina gear. Mods should be mostly stamina.

Stamina – needs the survivability to be the emergency revive and is also quite close to the front line. Is located just behind the tank most of the time.

Since the priority of this build is crowd control, skill power is not that important.

Seeker Mine (Gas Charge) – has the best disable in our opinion, disorient. Has the longest duration, the affected enemies don’t flail around wildly, and the smoke effect lingers in the area, sometimes disabling enemies who wander into the area.

Alternative – Turret (Dragonbreath) – great disable for any situation that enables you to funnel enemies down a tight corridor. Very prone to being hacked by enemy agents however.

Destructive talent on both SMG and LMG, preferably an AUG and an M60.

Healer support with many sources of cooldown reduction both for yourself and the group. You are the main source of healing and revives of the team, stays close to the back line due to the semi low health and armor. With a long-range revive and nearly zero cooldowns, this build is great for team survivability.

Overall is fairly balanced stat wise. You can sacrifice more firepower(DPS) for even more skill power, but is not all that necessary since all skills are healing skills. The extra firepower also helps with overall party DPS.

Skill Power – Main focus, you can try to reach the soft cap at around 45,000 skill power but we find the difference negligible with the heal skills

Firearms – since you will be near the back line, having some damage is good. If all goes well, no enemies should target you.

Support Station (Ammo Cache) – has the largest AOE heal but not the strongest. Also gives cooldown reduction for both skills and signature skills to anyone within the heal area.

With the low cooldown of the build, Support Station (Life Support) is not really necessary.

M1A with balanced. – the bread and butter talent for all M1A’s. Removes reticle growth with successive shots.

Firearms all the way, but has stamina mods in case survivability becomes an issue.

After running a week through challenge mode with this setup, we have noticed a few things.

With the first Incursion coming very soon, we will be updating this guide with our thoughts on how this team composition plays like within an Incursion. Stay Tuned!

TeamBRG - February 20, 2020
0
So, you’ve finished the Wolcen campaign and are now asking what’s next? Expeditions. Expeditions are next. A lot of 'em. This is heavily tied into...

TeamBRG - February 20, 2020
0
Planning, building and managing your city is a vital part of the Wolcen endgame. This guide details the ins and outs of city building management. Wolcen...

TeamBRG - February 19, 2020
0
Here's an introduction to Gems and Sockets in Wolcen - an important part of character customization and itemization! We also have a gem effects...